The State of Gujarat and its citizen have been paying a high price for the legacy of Gandhian values. In a previous post, I've regurgitated my views on alcohol prohibition in Gujarat and how illegal and illogical it is. Memories were refreshed by a recent news item: 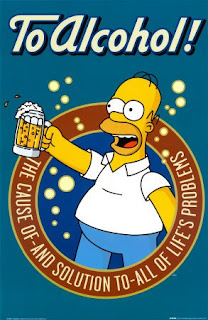 "The State government in its bid to make flow of liquor easier for visitors has started issuing permits at the Ahmedabad airport itself... ...The visitor will need to show his residence proof, signifying that he lives outside the state and pay nominal charges to obtain the permit,” an official said. Information about the location of liquor shops would also be provided with the permit..."

This suggests that one can procure alcohol, drink, and get drunk in Gujarat if s/he happens to belong to anywhere but Gujarat. In my view, it is just a form of racial discrimination between Gujaratis and the rest of the world. The irony is that it is the Government of Gujarat which is encouraging such discrimination against its own citizens. This law is a violation of the Indian constitution and what the constitution preaches, i.e., that all Indians be treated equally.

Note that the liquor permits are issued at the airport and not at the railway station. Mr. Minister gives the opportunity to drink only to the rich air passengers, but not to the not-so-rich rail passengers. Now, this is another kind of discrimination between the rich and not so rich.

So far, two other species were thought fit for alcohol consumption in Gujarat - foreigners and the army. What can explain the government's stand on allowing foreigners and the army to get drunk? Probably, the alcohol is more enticing to foreign tourists than Gandhian values. Or probably it is important to demonstrate the magical abilities of brewing "foreign liquors in India" (Indian Made Foreign Liquor). Why is the army considered untouchable for Gandhian values and is cursed to alcoholism? Why can't they keep away from liquor? Or does the government have doubts about the vigor of our men in the army and believes that they need the intoxication of alcohol to stand straight on the border?

“We have taken the initiative to ensure liquor is not an impediment in the growth of the tourism sector in the state,” says Gujarat tourism secretary, Vipul Mitra.

Now, this statement along with the action taken (setting liquor permit shops) indicates that the Gujarat government believes a "liquor ban is an impediment for the state's growth." Would that not then translate effectively to mean, "Gandhian values are impediment for the state's growth"? If that indeed be the case - is it not a straight forward insult against a man who can be found everywhere in India, on currency notes, in text books, on hoardings, in speeches (though embodiments of his values and ideologies are a rarity).

Conclusion: A new entry has been made in "the hall of fame of discriminatory laws." Even though this law is unconstitutional and discriminatory, it is a baby step towards lifting prohibition in Gujarat. The Government of Gujarat is hard pressed between the humongous loss in revenue from liquor boot-legging (worth Rs 100 mn involving tribal to tycoons) along with the ever increasing thirst of Gujaratis on one side and a piece of dead morality to defend on the other. It has very limited options to choose from. An outright revocation of the prohibition may sound justifiable and the best way to go, but it is hardly a politically viable solution. Given the circumstances, the baby steps are the only hope with the hope that the state would "keep walking" in the desired direction.

Solution: May be abstinence from alcohol was the need of the time 60 years ago, but now it is a part of mainstream society. And that, is irreversible. Nobody abstains from imported goods nowadays as they did then nor does anybody weave their own handkerchief. A simple solution would be to accept the fact that righteousness of ideologies do not remain the same with passage of time. But recognizing that would amount to blasphemy! It's a dam funny world, isn't it?

Smart Alec says "Thou shalt say nothing but truth, but truth thou shalt hide if it inconvines thee."

Note: When I was not able to give this article a proper shape, Nathan offered to do the job of editing and adding many phrases. My sincere thanks to him.