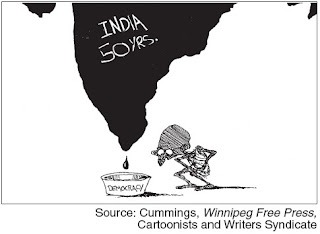 Election in Tamil Nadu are almost here. Campaigning has intensified and all the political parties have been throwing up promiscuous promises. These are chewed by the media and then presented to the citizen for their easy digestion. India's political history is witness that none of the promises made have ever been fulfilled. Now, for the first time in the history of Republic of India, Bhrashta Munnettra Kazhagam has announced an innovative election manifesto that is almost certain to be fulfilled. Here are some of the key promises by BMK.

Electoral Reforms: The first think BMK promises to implement is Cash for Vote bill. As per the bill, distributing cash and alcohol to the elegible voters will be legal as long as the date of such act is not more than a week of election day. The party claims that cash will help the voters buy basic entertainment commodities, e.g., watch a B-grade movie, avail prostitution, bribe the traffic police after breaking rules, procuring more alcohol, etc. This will ensure that the voters are relaxed on election day and able to make better decisions on whom to vote. Citizen's ability to make good decisions is vital for the spirit of democracy.

Basic Amenities: To tackle the problem of water scarcity in the state, BMK has promissed to promote use of tissue paper instead of water to wash public asses. In this endevour, Tamil Nadu Ass Wipers will be formed which would employee highly trained professionals from United States. This navaratna firm will wipe asses in public toilets free of cost and educate public on ass wiping techniques. To promote rural employement under NEGRA, Tamil Nadu Ass Wipers will also employee rural youth who would visit homes in distant rural settlements and wipe asses at no cost. An Ass Wiping tax will be levied on drinking water to cover the expenses incured in promotion of tissue paper.

Telecom Reforms: The chief spokesperson of  BMK has announced that the stolen 2G spectrum is in safe custody of BMK and it will be deployed for exclusive use in Tamil Nadu. This announcement has given major boost to Tamil nationalism. If elected, BMK will launch mobile TV version of Progress Channel in Tamil and Sinhalese to educate the masses about the progress of their projects and how they have fulfilled the promises made in election manifesto. New technology will be sourced from Somalia and it will enable the news of progress and project completion to be broadcast much before their launch.

Good amount of 2G Spectrum is expected to remain underutilized even after the implementation of above projects. To make good use of the remaining spectrum, BMK has brokered a deal with a major DTH provider and has promised to distribute free settop boxes along with free 5-year subscription of Progress Channel. The spokesperson added that the kickbacks from the DTH provider will be securely transferred to a Swiss bank so that prime time could be focussed on government progress reports rather than scam stories.

Defense: BMK has promised to increase the budgetary allocation for defence of Sri Lankan Tamils. A Bofors Tank Factory will be set up with the help of Mr Q to produce tanks exclusively for use by Sri Lankan rebels. The tanks will be provided free of cost to them. They will only need to bear the cost of the wheels, body, cannon, and cannon balls. BMK chief has already appealed to the residents of  Tondiarpet to give up land for this nobel cause.

Women's Reservation Bill: BMK's Women Wing chairman has announced that they will continue to fight for the upliftment of women and increase the number of women in the parliament. Towards this, she added, BMK will blackmail the coalition government at center to amend the Hindu/Islamic/Christian Marriage Laws. The ammendement would legalize the BMK leaders right to polygamy. In this way, they will be able to field more wives in the future elections and consequently put more women in the parliament.

Political Reforms: The above amendment will also ensure that generation after generation of BMK leaders are available to serve the public. Since all the MLAs and MPs will be from same family, there will be no disagrement in workings of the government.

Fishing Community: The plight of fishing community has not gone unnoticed by the BMK central command. They have vowed to address the issues of catchment area of Bay of Bengal being over-exploited and devoid of fish stocks. As soon as BMK is elected to majority, which they are certain of, free spoken Sinhalese classes with be held in costal districts of Tamil Nadu. This will enable the fishermen to speak in Sinhalese and escape when caught by Sri Lankan navy while fishing in Sri Lankan waters. This step would encourage more fishermen to venture out of Indian sea teritory and fish in Sri Lankan waters rich in fish, and hence, improving their life style.

Urban Development: As a sideeffect of rapid development and urbanization (thanks to the present BMK government), the issue of street dog menace has gained significance. BMK has promised to tackle it in the next 5 years of their governance. BMK Youth Wing has come up with an extremely innovative idea to install free condom vending machines specifically designed for Indian street dogs. The machines and the condoms will be designed, manufactured, and distributed by Singapore Cannines keeping the needs of Indian street dogs in mind. All of the equipment will be imported and the project will not be outsourced to India in order to maintain the high quality.