Sex on the Grass 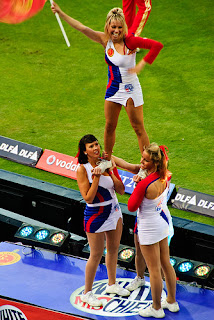 Until recently glamor in cricket meant the model/actress wives of the star cricketers present during the game. And the occasional bikini-clad fans attracting the camera. I remember the incidents when after-match discussions were centered around appearance of such beauties on the screen. Incarnation of Indian Premier League has totally changed the scene. There is glamor everywhere, from the corporate offices of the teams to the grassy grounds. One can see heartthrobs from entertainment fraternity entertaining the crowd by their mere presence.

And then there are cheerleaders, giggling, hip shaking, pretty girls. Its nice relief to see some semi-nude female bodies after your eyes have gone sore tracking the tiny ball. Seems like the IPL organizers understood the human psyche pretty well. Even if you don't understand and enjoy cricket much, you can keep yourself busy looking at the pretty faces and gulping down alcohol.

The organizers of the game have made great efforts to handpick the prettiest of them around. All of them slim with flexible bodies. All of them professionals in the business of hip shaking. And all of them with shinny and fair skin. Err, I'm bit wrong here. To call them fair would be unfair. After all, they are all white-skinned Caucasian. This turns a little mysterious here. In an event which is highly Indianized and world class when it comes to the players, none of the cheerleaders are of Indian origin. What made the organizers select only white-skinned cheerleaders? They have not offered any explanations, but here are few hypotheses:

Explanation 1: There are no professional cheerleaders in India.
Justification: Is it a high-skill job that needs specific technological know how? Ain't it possible for the professional dancers and wannabe item girls to morph into cheerleaders? India has a long tradition of item girls (in cinema) and dancers. It would be difficult to believe that the IPL organizers could not find a single such dancer who could shake her hip on tunes of the ball.

Explanation 2: Indian girls would not like the skimpy outfits which are essential for cheerleaders.
Justification: Well, you gotta take a look at some Bollywood movies and music videos to verify the validity of this claim. Given the kind of skin show we encounter on television and silver screen, it is hard to accept that modesty of Indian lads would come in way of them getting into revealing clothes.

Explanation 3: TV-viewing middle class of Indian diaspora will get a punch on their morality after seeing the seduction of the brown skins.
Justification: Had that been the case, we would have been seeing exodus of middle class from multiplexes and of television radio waves from the sky. However, media viewership has increased over the years with increased nudity in contents. Nobody complains about it. In fact, the masses are saying "yeh dil mange more."

Explanation 4: Saffron politics might tag the IPL as an attack on the pavitrata of Bharatiya nari.
Justification: Now, this logic holds some value. One can never predict what can be considered as anti-national and anti-cultural (that too antient culture). Influence of a one such saffron party on the IPL head is well known. Strangely they don't have any issue with skin show on television and movies. And neither they have a problem with skin show on IPL as long as the skin is not brown.

In the end, the logic seems to circle back to the Indian preference for white skin. We are obsessed with the Caucasian race. Its the same old infatuation that started with Vasco da Gama hitting the Indian shores, long before even Indian existed.

Clarification: People with white skin might think that I've written about them or that I have some reservations about foreigners being employed in IPL. Absolutely wrong! What I'm trying to hit here is that part of Indian psyche which is boastful of their culture and at the same time, can't hide the jaw-dropping desire for everything phoren. I'm trying to hit that part of my psyche that forces me to write this in a phoren language.